A little over a week ago, Coindesk came out with an excellent article titled: How Bitcoin’s Technology Could Make Supply Chains More Transparent

The piece outlines the potential future uses of bitcoin/blockchain technology, in respect to increasing transparency of supply chains (the article specifically refers to food products). If you haven’t given the article a read yet, we definitely recommend you do in order to grasp the full scope of this post (we aren’t going to rehash the article).

Exactly a year ago (this week), the Shitcoi.in staff were in Barcelona on a debaucherous journey. Somewhat pissed off, after looking for two bitcoin ATMs and turning up empty handed, we decided to grab food. As frequent Barcelona visitors, we have our favorite places to eat, but are always on the lookout for something new. Our preference is to only eat organic, locally sourced and sustainable.

The common theme of conversation on that trip was the ongoing decentralization of everything, and its direct impact on our lives. Our indecisiveness on where to eat led us to start drinking, and a few Estrella’s later we came up with the framework for what we would later decide to name – X.

X (which usually marks pirate treasure on a map, duh), was what we decided to call “reverse Uber for food”. That reverse Uber part might need a little bit of work, but we’re willing to adjust.

The idea is to create a phone app for finding local food that actually works, i.e: doesn’t show “eye candy” as a characteristic of the restaurant you are looking at (re-reading our notes actually made us lol at that part). Part of the solution was creating an intuitive interface with which the user could view hoards of data, including entire supply chain information. The other part of our solution is our sustainable revenue model, which is not ad based.

Here are some of the notes that we took originally.

Challenge: Eating healthy is tough in itself, eating healthy in a rush or while on vacation is even more challenging. While a Michelin star or a restaurant run by a student of Ferran Adria may denote an acceptable food consumption venue for some, these indicators are not an end-all for most. Today’s food app solutions are based around a centralized, crowd sourced “internet 1.0” architecture. Rather than attempt to fix this flawed model (as many have done in the past), we propose: building a new, decentralized system. In essence, re-inventing instead of repairing.

Part of this re-inventing includes a viable revenue model, something many startups in the social media/app/tech space lack today. Restaurants typically pay a minimum of 2-5% (sometimes as much as 10% or more) in credit card fees to their credit card processors. By requiring our customers to pay via Bitcoin (directly in the app), we can still take a fraction (micropayment) of the total from each bill and save the restaurant money on their bottom line. The user is incentivized to use the app because of a) the content and b) a free item, which will be given to them by the restaurant for dining with them any booking/paying with X. The savings in credit card fees subsidizes the free item for the restaurant, and there is no worry of chargebacks.

What we are seeing today is the de-centralization for everything. From transport (uber), to energy (solar, wind, urban renewable) to food (urban gardening/local-organic) and across many other areas. As the details of the modern food industry, GMOs, antibiotics and corporpations etc…. add more here have been divulged to the general public, more people have sought to maintain a healthy lifestyle and avoid many types of products. Talk about Pacific ocean fish here. People are seeking fresh, natural, locally grown food. Today’s apps might show us what is “popular”, but gives us no way to actually judge the quality of the food we are eating.

Our “solution” would consist of 3 different pieces. What we would like to produce is a software package.

The goal is to keep things as simple as possible, as we believe simplicity = success.

What are consumers looking for?

Our software would require each restaurant to keep track of their ingredients via their “terminal”. This would be constantly updated to the cloud database for processing and retrieval via the app. The app would simply show a map of the users location and the closest restaurants that were “partners”. The different restaurants would be ranked via a proprietary algorithm, which would take into account the freshness and “organic’ness’” (we could create some key word here that could also be part of our app name) of each product that the restaurant used.

The goal is to stay away from the traditional metrics that we see on EVERY food site today (grubhub, tripadvisor, etc). We may want to also include a $, $$, $$$ ranking, but should try to keep the filters as simple as possible.

There is the possibility of programming a revenue tracking section to the “terminal” that would be housed at each restaurant. This would be used to help track revenue loss from expired ingredients and could be used to model future purchases from vendors.

Currently, restaurants pay anywhere from 2% – 10% in credit card fees to their processors. Using Bitcoin to pay, there will be a ~1% fee for transactions. An additional ~1% can be added on top of that (our processing fee) and there is still enough money left that promotions could be added without any loss for the restaurant. At this point, Bitcoin has passed the threshold into the mainstream, and the simple fact that using Bitcoin IS our revenue model will attract a large amount of media attention. The additional incentive for the restaurant owners is that there are no chargebacks with Bitcoin.

We even threw together some fun slides (here are a few of them): 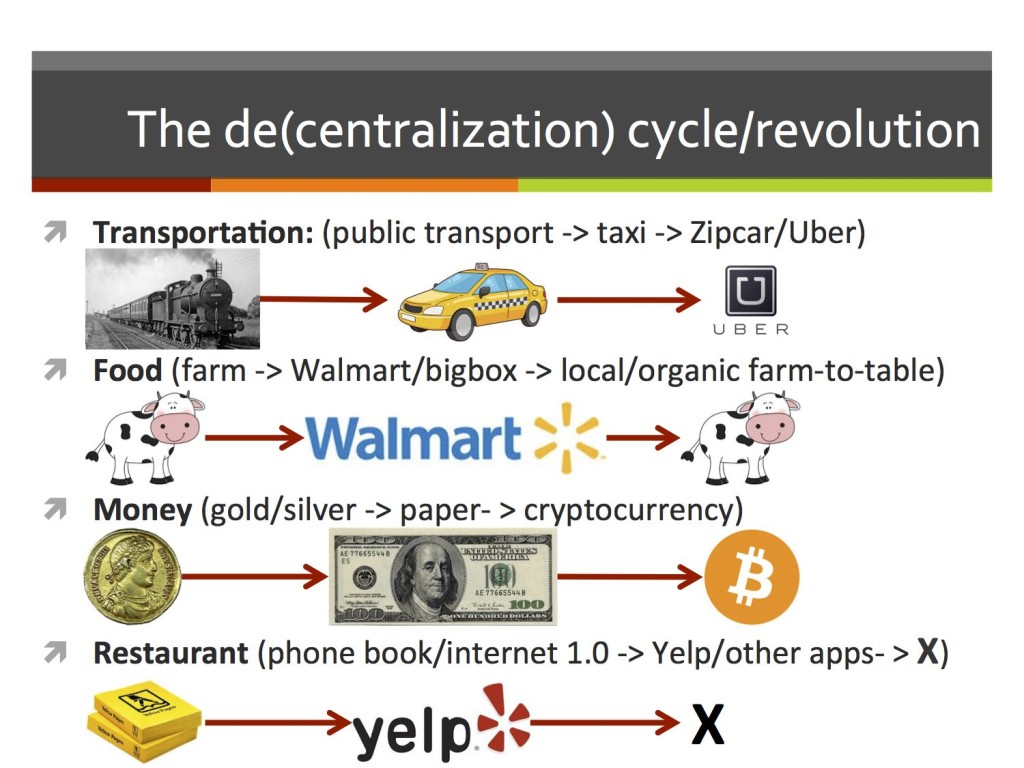 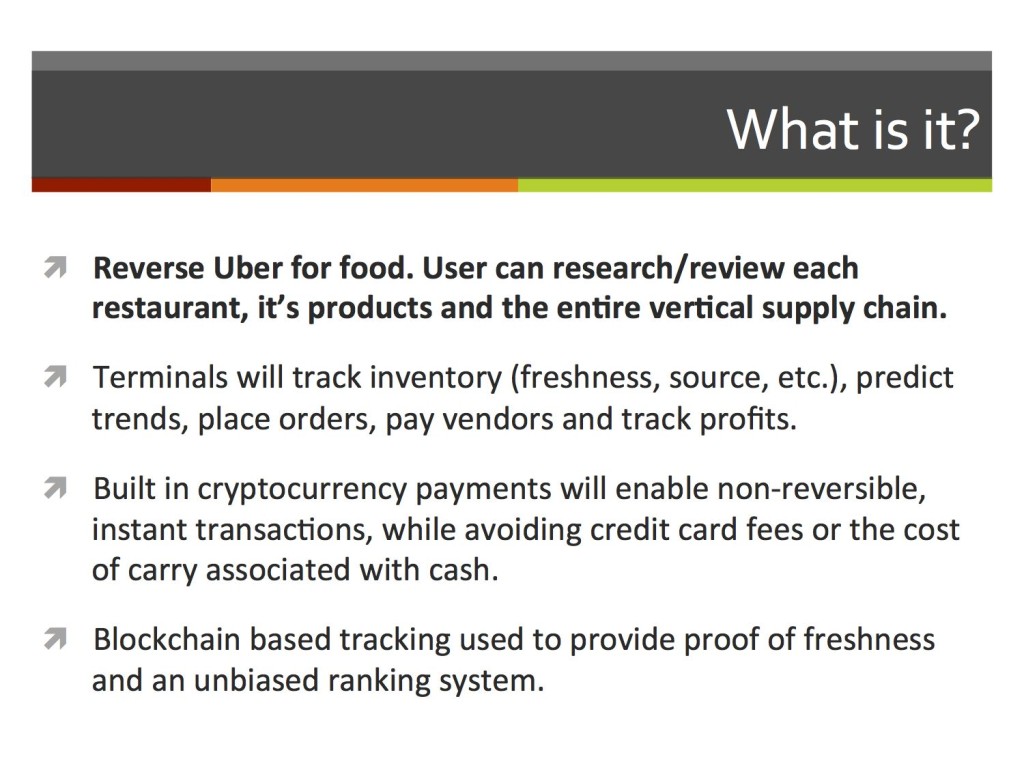 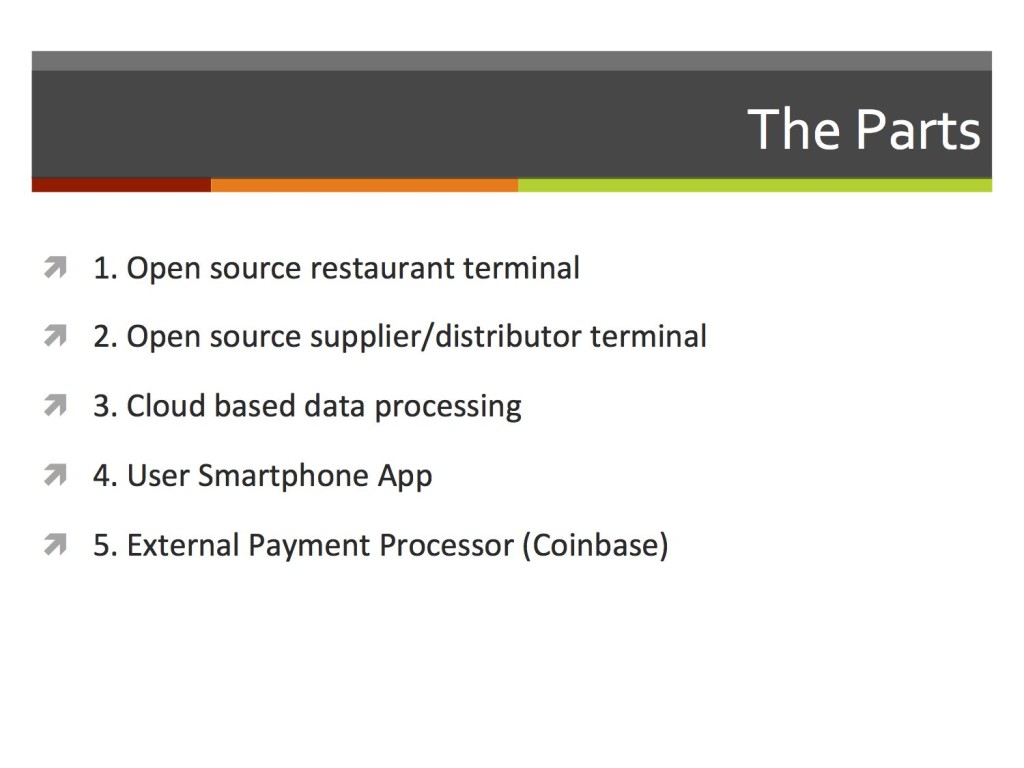 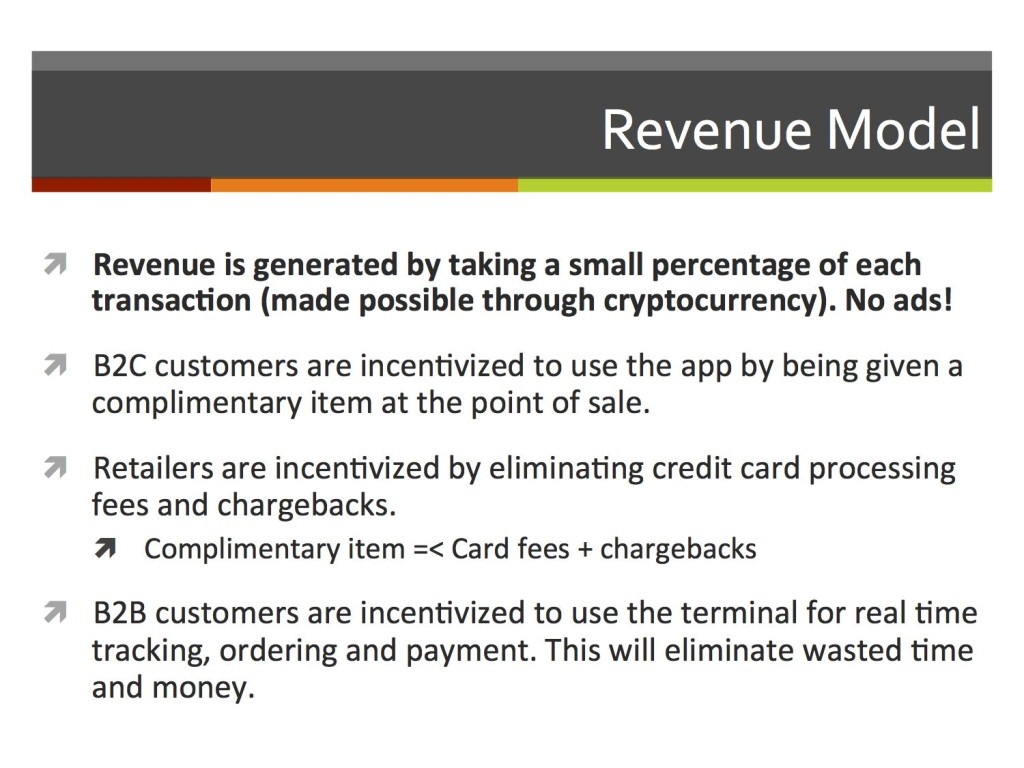 Obviously the idea is unfinished, we would love to revisit it. Just to clarify (in case you were wondering), yes, this is what we do for fun sometimes… Any VCs want to throw some money our way and move this forward? misinfo@shitco.in