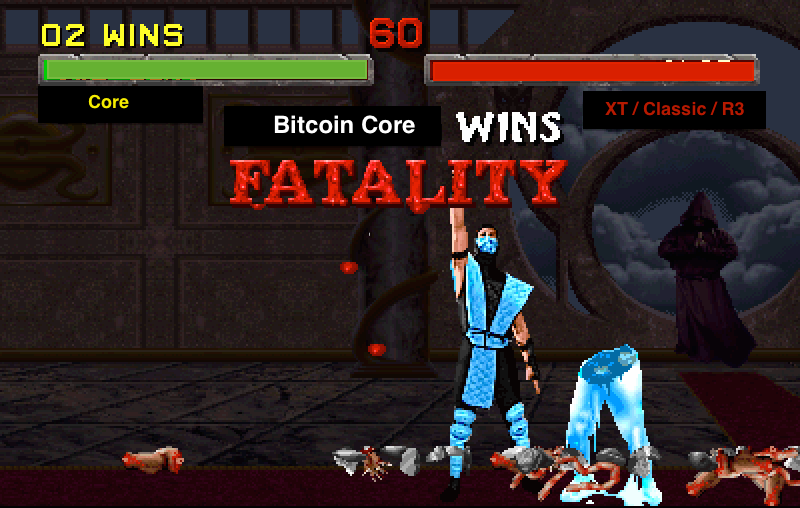 We have stated since inception, our purpose is to promote positive energy, and critical thinking within the Bitcoin community. As evidenced by our previous work, the community has been positively receptive and have changed their unbearably passive attitude to be more critical in analyzing the many moving parts of the ecosystem. Although we have taken a much needed, but personally acrimonious break from our contributions, we have been following intimately as the events surrounding the block size debate, R3/Hearn/Gavin drama and Craig Wright the Satoshi imposter have unfolded.

Much to our pleasure, the community has become more aware, skeptical when necessary and objective overall in their views of the events surrounding the attempted XT hijacking, spam attacks, absolutely atrocious social engineering ventures and other perceptively nefarious behavior. Unfortunately, for the opposition, the internet is a very powerful tool, and a few seconds with your preferred search engine will yield surprising results. Our task is to outline relevant items/events and provide timelines and evidence (always supported with sources). The community is left to piece the rest together, which to our satisfaction, they have done at an exceedingly brisk pace. Whether it’s a community member contributing a blog post, info graph, meme or slightly off color but educational comment; every attack on bitcoin in the last six months has been successfully deflected by the increasingly vigilant community. Hats off to you, keep up the great work.

The close of 2015, and onset of 2016, left the community at large pondering some exceedingly questionable events. For the sake of brevity, we won’t outline all of them here, only the most relevant. As always, we recommend using a search engine of your choice to independently educate yourself on the details surrounding each independent event, as there are various news sources (aka: slants/views) reporting on them.

Please remember to keep in mind, that throughout this time period, various attempted social engineering attacks took place within the community. Many of these attempts have been exposed or theoretically discussed via Reddit and other sources. Use your favorite search tool to further educate yourself on this topic as well.

The following list is not inclusive of all events which took place within the span of time denoted, but events which we consider to be important to make note of:

@tomerkantor you are right – that is badly written. I’ve fixed it on the blog.

Craig Wright once again fooled us. His todays „prove“ signature is just a signature from a tx back in 2009. Scamer! https://t.co/5VnDRLpmKc

"Craig Wright is Satoshi Nakamoto, and I have not been hacked." –@gavinandresen at #Consensus2016 pic.twitter.com/19tSymegKN

And.. now we’re here, right now, at this point in time. Left thinking: What the fuck is going on?

There are conspiracy theories (and sometimes facts) which are most often disclosed of in an unintelligent fashion via various internet outlets. Although thought provoking many times, these pieces of information are often misinformed, or hyperbolic in nature to support a certain viewpoint. As we always state, the internet is your friend, and a few key words typed into your favorite search tool will yield much better (and factual) results than a bunch of financially and emotionally invested entities who’s true identity and intention are cloaked via the interwebs.

It would be hypocritical of us to say this without stating (again) our viewpoint and intentions: To entice the community to think critically through the “issues” currently facing bitcoin, and form their own opinion based around their findings.

From JP Morgan’s bailout of the US Treasury (yes, it’s on their website), to The Marshall Plan (yes, from the same outlet which promotes Craig as Satoshi), to The Bretton Woods System and even High Frequency Trading (and various other examples), financial history is littered with attempts to co-opt control ,or gain an edge over others. Due to the inherent underlying nature of the existing financial system, there is no accountability, in many cases no public record or oversight and new flaws which we see exploited almost on a daily basis now.

At the most basic level, what is the difference between QE and removing the coin cap of a specific cryptocurrency in the future? Would the worlds largest mining pools for that crypto be any different than today’s TBTF institutions? Maybe transactions weren’t fee based, blocks got too big and the miners couldn’t support their operations due to a lack of competitive fees. In this future world, the theoretical blockchain has been established as the backbone of the global financial system. It’s efficiency has been recognized in almost every facet of our daily lives, and like the internet today, the world would come to a standstill if miners had to shut down operation. The only solution? BE: Bit Easing.

By design, bitcoin eliminates these flaws, removes the need for a trusted third party and enables a plethora of additional opportunities which are beyond the scope of this piece. The ONLY way to co-opt, or gain any sort of edge, is to hijack the code itself. We sit here every day talking about Sajcandles, discussing what’s critical in the next two weeks and coming to the satirical conclusion that Satoshi is actually an alien. But, does anyone stop and think about what’s going on behind the scenes? If we’re actually fucking around every day, in and out, with the next global reserve asset, why would this time be any different?

To be clear and fair, this isn’t just applicable to any parties those mentioned in this piece. The logical assumption must be made that any entity, could and would attempt any type of nefarious action against bitcoin at any time. This whole thing may be the result of a 16 year old troll (yeah, ok) or a complex Craig Wright actually is Satoshi scheme for some yet to be disclosed purpose (shitco.in headquarters is running out of canned unicorn farts, so if anyone has a source please e-mail us), so be sure to have an open mind when assessing the situation. Do the same with any future squabble, which may seem out of place.

Cleverly placed near the end of yesterday’s Economist article, anyone who doesn’t need a tl;dr saw the following:

It pays, too, to bear in mind that Mr Wright’s outing will most likely be of benefit to those in the current bitcoin civil war who want to expand the block size quickly, whose number include Mr Matonis and Mr Andresen. Mr Wright says that if he could reinvent bitcoin, he would program in a steady increase of the block size. He also intends to publish mathematical proof that there is no trade-off between the mass adoption of the cryptocurrency and its remaining decentralised. Simulations on his supercomputer show, he says, that blocks could theoretically be as large as 340 gigabytes in a specialised bitcoin network shared by banks and large companies. And he is already trying to undermine the credibility of the faction that wants bitcoin to grow only slowly. In an article in the press kit accompanying the publication of his blog post, he takes aim at Gregory Maxwell, one of the leading bitcoin developers, who first claimed that the cryptographic keys in Mr Wright’s leaked documents were backdated. “Even experts have agendas,” he writes, “and the only means to ensure that trust is valid is to hold experts to a greater level of scrutiny.”
This heightened scrutiny will now fall on Mr Wright as well. Whether people will believe he is Mr Nakamoto will largely depend on what he does next. He does not appear to have a clear idea of what his role should be. After proving his identity, he says, he wants to disappear again—“just like Satoshi”. But he also seems to have big plans to influence the evolution of bitcoin. He is poised to release several pieces of research on how to improve the inner workings of the bitcoin system. Should these contributions be as brilliant as Mr Nakamoto’s white paper, even sceptics may come to accept that Mr Wright is indeed the inventor of bitcoin.

Which we will leave for the reader to interpret in whichever way they would like.

Who are the “we” that he constantly refers to? (and wouldn’t his language be slightly better given his academic credentials)?

In conclusion: Any and all types of attack on bitcoin should be considered the norm at any time. If this isn’t your way of thinking, change it. While certain entities in the space have put forward positive scale-ability solution proposals, others have devoted time and resources to intentionally mislead and discredit the community at large, while seemingly pushing a larger agenda. A realistic view of the future may be that LN and Plutus are players in the space, with BitGo Instant, Coinbase and Circle the way that major credit card processors or ACH/SEPA (even something like Chase QuickPay) compete today for their stake in the transaction processing realm. Maybe all of these will become obsolete, and a newer, yet to be invented solution will take hold. Of course the block size debate is more complex and political than this, but even the grossly misinformed msm should be able to pick up on some non-drama concepts in the bitcoin space. Any bitcoiner knows that still, today, there is absolutely no problem sending a transaction through the network with a proper fee. This hasn’t changed in years, and with the exception of bullshit attacks, probably won’t change for months, or years to come.

Bringing us back to the title: The Actual Current State of Bitcoin

Bitcoin, at it’s core, hasn’t changed. Hearn gave us some cheap coins, and Wright probably 20x shorted $470 and is pissed he didn’t get a Hearn dump. A few people made fools of themselves, and seemingly, without provocation, confirmed at least some conspiracy theories are actually conspiracy fact. Whether this is an act of desperation or stupidity, we may never know. But, as a community, we can thank certain entities for exposing themselves and their true intentions. The community is a cleaner, and much more positive place without them. In the end, does it matter who Satoshi is? Has he done anything to harm or co-opt bitcoin since his departure? Why would Satoshi Wright go to the “media” instead of the community, as Satoshi Nakamoto had always done?

The ironic part in all of this is that the coercion and attacks have only brought the community closer together. With the exception of a few deflectors, the more macro-minded in the community see the larger picture and are moving forward in a productive manner to continue bitcoin propagation globally. We don’t expect this to be the end of bitcoin drama, by any means. Any future attempts at co-opting the protocol will likely be more sophisticated, given the epic fail nature of what appears to be an attack, based on this recent, widely publicized series of events. We do thank everyone though for the increasing media exposure bitcoin has received as a result. If Satoshi ever decides to unveil himself/herself/themselves, it won’t be through a coordinated media dis-information blitz, and months of hype surrounding a complete non-story (oah wait, duh.. that’s their standard protocol). In the meantime, doesn’t it make sense to focus on the more important issues?

Just a few side notes to close things out: