If you were one of the seemingly unfortunate individuals to receive an e-mail to your spam box yesterday, indicating that you were the proud recipient of having your Coinbase history sent to the IRS… There’s potentially a gold (bitcoin) lining.

Coinbase – change your e-mail settings for these types of alerts. Return-Path: <xxxxxxxxxxx@datadrivenemail.com> is not friendly with spam filters. 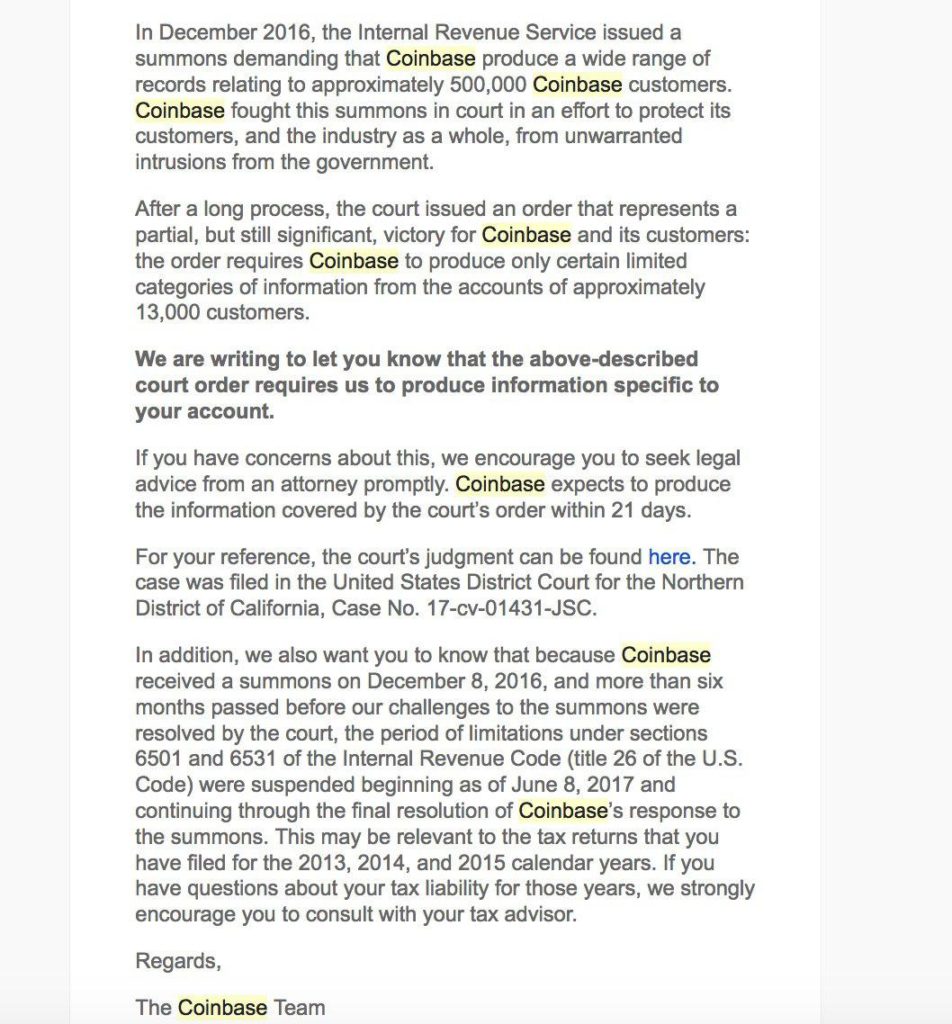 Digging into the linked court filing, we see:

The Narrowed Summons is looking for users that have a cumulative of $20,000 USD or more, in one transaction type. By the wording, this appears to be cumulative over the course of one calendar year. Transaction type consists of: buy, sell, send or receive.

This would include (according to their wording):

So, the IRS is seeking information on 14,355 individual’s Coinbase transactions, which consist of the above groups (don’t forget the countless other scenarios). For a time period of 2013-2015.

Now, let’s visit the not so recent news regarding those who actually filed their taxes correctly (that’s us).

We don’t like to make assumptions, but those numbers are pretty fucking close.

If you bought and hedl (like us) more than $20,000 USD of bitcoin during 2013-2015 during one calendar year via Coinbase, and didn’t cash out any, you’re part of the special 13,521 club (for US investors using Coinbase). Best case scenario.

Is this realistic? Not at all. You’re likely part of a much smaller number.

Disclaimer: Is this investment advice? Clearly not. Is this tax, legal or anything else of that nature advice? Absolutely fucking not. If you were dumb enough to sell on Silk Road and cash out on Coinbase then go elsewhere for help. We’re not lawyers, accountants, IRS agents or anything remotely related to any of the above. Fuck, we aren’t even professionals at all, other than trading and shitposting. Just a bunch of hodlers pointing out the obvious.

Credits to: MrJozza for discussion regarding the topic, who is also none of the above.