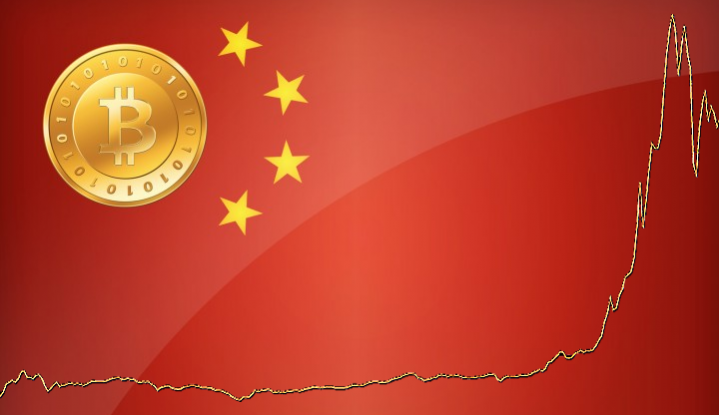 It’s been fun watching rampant speculation and inaccurate, lazy reporting regarding the most recent rise in bitcoin price. Conspiracy theories are running wild, and tin foil hat traders are petrified that they will get burned again when the “ponzi” collapses. Guess what guys? Unlike last time, that shit probably ain’t gonna happen anytime soon.

We have no idea who the fuck started the MMM ponzi meme, but good job. You have the entire community up in arms with some dubious information. For starters, this entire thing was based off of a few tweets from BTC China, starting with:

1/ We've had reports of dubious "investments" involving #bitcoin. These may be ponzi schemes designed to steal your bitcoins.

Days later, the CoinTelegraph article we linked to earlier was published. We are not suggesting that BTCC is lying in anyway, or that their customers have not received dubious investment solicitations involving bitcoin… but how on earth is a “ponzi” (aka MMM) that has been around since April 2012 sending us somewhat parabolic right now? Common sense would say, it isn’t. Besides that, bitcoin isn’t actually part of the “ponzi”. Those who have done their research know that it is just a way to fund your “ponzi” account. You can also link to your bank account, which is much more convenient for most normies.

Traders have been intrigued by the spread between western exchanges and China. There has been unfounded speculation that this could be because Chinese are moving money out of the country and cashing out on western exchanges. While this is most likely true, is this really the main catalyst for the rapid price increase? Doubtful.

Logic tells us that we must investigate this a bit further, to find the real reason the bulls have been on parade.

Let’s see… Could it be that China UNBANNED bitcoin? Fucking finally?

From the Cyberspace Administration of China:

US Commodity Futures Trading Commission (CFTC) has for the first time the Bitcoin virtual currency and other commodities defined, announced that it would Bitcoin futures and options trading supervision. Shortly thereafter, on suspicion of money laundering use Bitcoin trading platform, CFTC called on Tel Aviv to a Bitcoin trading platform swaps were punished.

Coincidentally, the United States State bank regulators Joint Committee recently recommended that the third-party electronic money transfer transactions or conduct of the company, included in the scope of duties of state banking regulators. Although still at the proposal stage, but it will promote economic regulation of electronic money or active processes.

Changes in the regulatory level of attitudes, for stormy markets Bitcoin is twofold impact. On the one hand, a variety of use bitcoin be illegal speculation and speculative behavior of money-laundering, will gradually usher in tougher “long supervision.” In fact, compared with around Bitcoin transaction itself, the risk Bitcoin development of various types of derivatives and structured products based on greater, and this is the reason Bitcoin is classified as commodity management lies. On the other hand, in a regulated environment for development, Bitcoin is also possible to gradually get rid of “bad boy” image, the evolution of a stable to choose a modern financial portfolio.

The current has entered the “post Bitcoin era”, away from the ups and downs, Daxitaibei towards rational and norms Bitcoin into the mainstream of development. In fact, more innovative value bitcoin block chain behind reflect its (block chain) technology. This is a series of related data using cryptography block-linking method, each data block contains the information in the last 10 minutes all Bitcoin network transactions, used to verify the validity of the data block and generate its information. Block chain provides a decentralized try, for various industries including financial, including providing a way to re-establish an information verification, credit constructed. Recently more and more attention to the technology of traditional financial sector. For example, according to the European Banking Association (EBA) in the latest report, the block chain technology with lower costs, improve product supply and improve the speed potential.

Although some people think bitcoin block chain and its technology was not stable, but it can not ignore its revolutionary changes brought about pay for. Traced the Internet and new technology development has brought the expansion of distributed payment and settlement mechanism, which may push financial transactions distributed innovation. Even relatively “stable,” the Federal Reserve, in early 2015 also released a report, to create conditions for direct clearing between financial institutions facilitate public IP networks, because this is more likely to reduce costs.

In the “post Bitcoin era”, although many are not virtual currency is closer to real money property, but in the relatively stable development path, through to payment and settlement functions to explore the core of the currency, but it will help to explore the real Innovative electronic money. However, the pace of innovation behind have followed from the regulation. (Tao)

Let’s look at the date and time on this release: 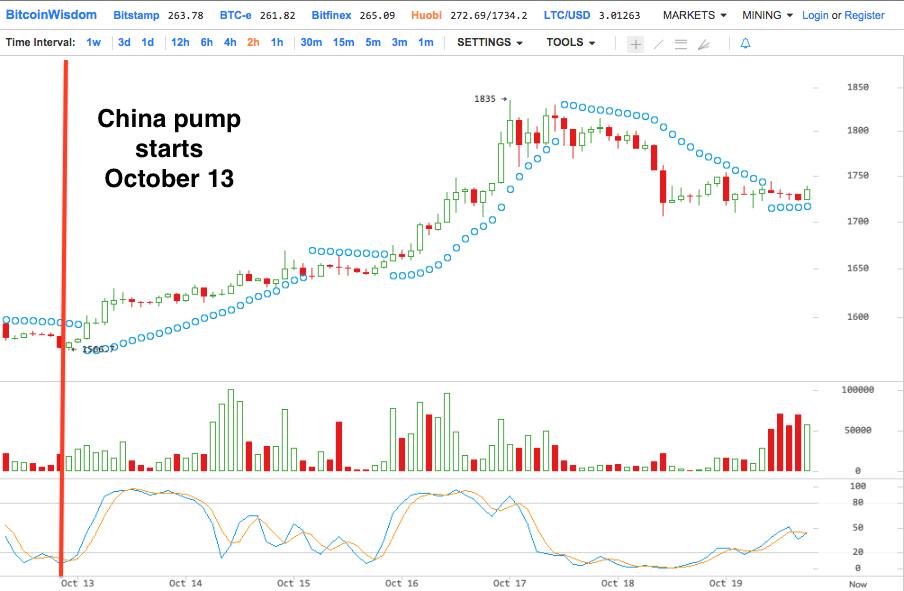 And when did the China pump start?

And to top it off, Harvard Business Review China hosted the 1st Global Blockchain Summit, in Shanghai, on October 15-16, 2015.

About the summit (typos are theirs):

As the first professional blockchain technology institution in China, Wanxiang Blockchain Labs sincerely invites all interested parties to join our first global blockchain summit,. During the summit, we will discuss the applications and opportunities of blockchain technology in areas, such as Online Payment, Internet of Things (IOT), Securities Trading, and Digital Assets Management. We are expecting around 200 guests attending from various backgrounds, including banking, manufacturing, information technology and academia, etc.

More information can be found on 8btc, here.

In summary: Is this small bull run just a blip in this annoying as fuck 200-300 range? Based on the fact that it appears China has just officially unbanned bitcoin, probably not. After two long years, put on your mother fucking moonsuits. We’re about to head much higher!

Obviously we may have no idea what the fuck we’re talking about, and this shouldn’t be considered to be financial advice. We’re long. Are you?