The last thing you want to do when it’s really nice outside is sit and read through/analyze documents. Even worse, is when you finish, and realize you just wasted hours of your life that you will never get back. If you haven’t guessed, yes… this is related to OK Coin.

Today, they took their turn in evidence presentation to the Bitcoin community and general public. In this Reddit post, the CEO (Star) gave his arguments, and side of the story regarding the document forgery. Pastebin here in case that is deleted. As expected, none of the other pressing issues the community has been hounding OKC about were even remotely addressed. Shitco.in has our own questions for OKC, they were outlined in this post.

As part of their evidence, OKC posted the following video:

Almost as if their goal was for this to be the focus of the post, the link and “subtitles” (Guys, you REALLY have to start learning proper English. Maybe, “walk through” would be more fitting.) take up a full 1/3 of the Reddit post. Most ADD Redditors probably stopped there. To anyone who doesn’t know Chinese, the video is pretty much worthless because you have to take their word for what is going on. They move so fucking fast through everything, and it looks like they used a potato to record it. Yes, we paused the video a million times to see what as going on, but if you are presenting “evidence”, it should be much more user friendly. The conclusion that they want us to draw, is that a former employee (CZ) is the culprit.

After this, we have a sliver of the report which was written by Ben McGinnes. Again here, we have to analyze the specific format that OKC chose to insert this into the Reddit post, because to us it is just hilarious. Someone went out of their way to write a 20 page report not making you look like total assholes, and you bury the link directly to the PDF in a 3 character hyperlink? Then there is a link to the site where the report is posted, but users have to click another link just to view it? Click here to view the report. Yes OKC, we gave that PDF more exposure than you did (by 6 characters).

The report that Ben presents is extremely thorough, very well documented and very professional. Overall, it looks like a very solid and well researched piece of work (great job Ben). We took the time to look through the sources, read through everything and fully digest the information presented. The entire report is interesting, but the most relevant part to our readers would be the conclusion: 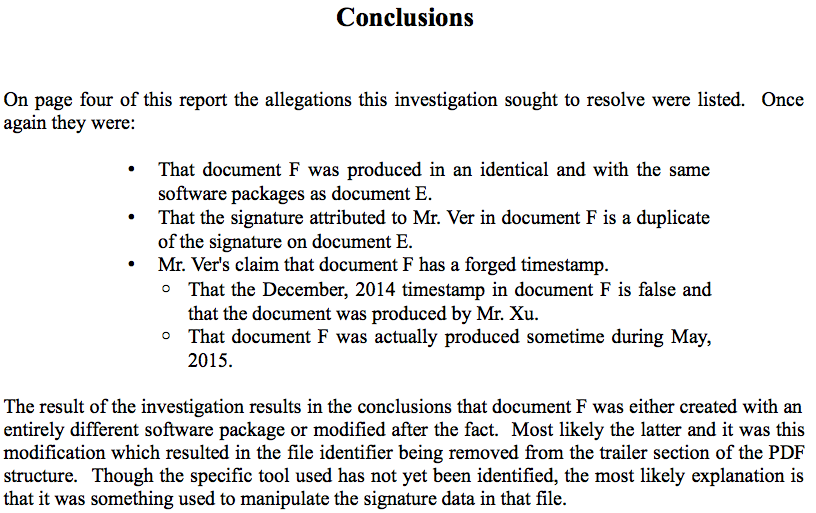 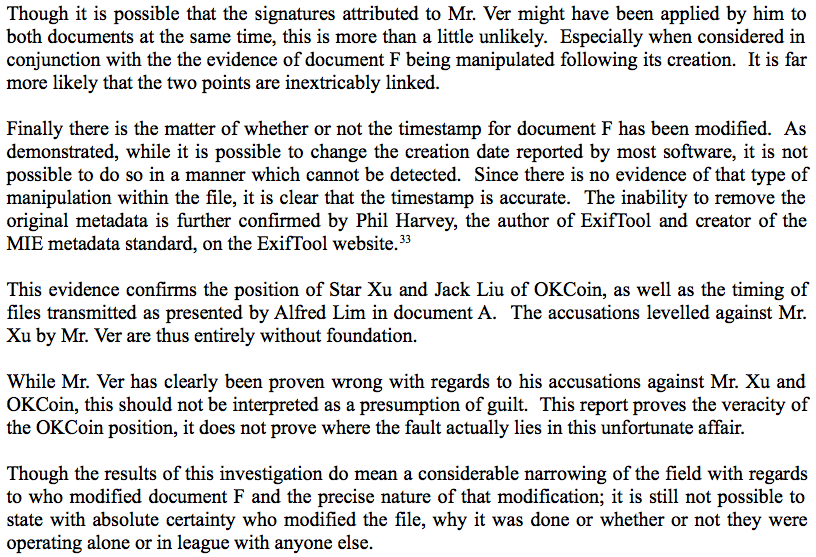 In summary, we have OKC admitting that there was a file modification, but because it wasn’t Star – its OK! Roger’s cryptographic dis-proof of fraud bounty hasn’t been collected, and OKC tries to sweep this under the rug by paying out their bounty and attempting to make a public event out of this “conclusion”. The key word from the last sentence, attempting. Honestly guys, we have had more posts on the front page of Reddit (for longer) than the “leading global bitcoin exchange” regarding this topic.

Even if the v8 of the document were “real”, OKC would still owe Roger money for the months they managed the domain. If OKC thinks that this makes them look any less sketchy, they must have some fine narcotics in China because this is even more incredible than before this recent temper tantrum. CZ was the CTO of OKC, a C level exec of what should be considered a financial institution. While we are aware that fraud in existing financial institutions runs rampant, shouldn’t there be some sort of cross check system within any organization for legally binding contracts? How does it change the situation that there was a fraudulent document introduced, that was signed off on by a then acting officer of the company? Oops, sorry. We mean “officer of the brand”. To us (and probably the legal system), this still constitutes fraud.

We still would appreciate answers to the following 3 questions:

1. Can you show us your cold storage wallet and proof of BTC(XBT) reserves?

This Reddit post outlines your policies, as if it is meant to ensure users their funds exist. Even more hilarious, are the posts in that thread of people bashing OKC months ago.

2. Do you have an English speaking lawyer that is interfacing with US authorities, to ensure that OKC is in compliance with US regulations?

3. Can you please outline your corporate structure for the community.