Less than 24 hours after the latest OKC drama came to light, things have escalated significantly. A cache of e-mails between Roger Ver, OKC and other involved parties has been released by Reddit user la0ban – link to the post here – link to the imgur of the emails here.

As if things couldn’t get any more ridiculous, these e-mails show that the clock is stuck at amateur hour over at OKC, and has been for quite a while. There really isn’t any nice way to put it at this point, and it wouldn’t surprise us (or many other Bitcoiners if Reddit is a gauge) if OKC was also engaged in other, seriously dubious practices.

Again, we would like to reiterate the point – OKCoin, the self proclaimed “leading Bitcoin exchange”, appears to have (at the very least) created a fraudulent document in order to back out of a deal that was going to lose them money. The question we ask is, why would you trust them with your money?

We were really looking forward to more drama unfolding, but had no idea it would materialize so quickly. OKC tried to mitigate the situation with a blog post clearly designed to push their narrative, but like most of their bullshit, their desperation is nothing short of completely transparent.

Moving on to today’s fun – (Roger/his team is in blue, OKC’s side is in red).

Apparently, knowing the content of the site they are supposed to be managing is too much to ask. 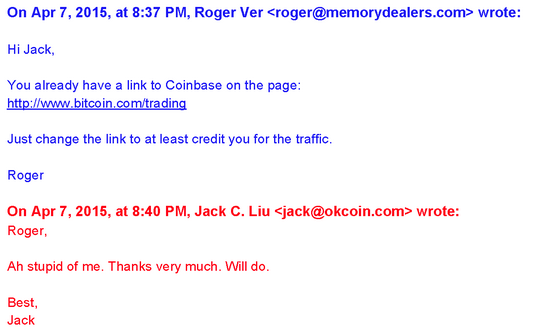 This is just insane… these people run the largest futures market for Bitcoin and they don’t know what is on a page that says this at the bottom:

For any doubters, archive.org doesn’t lie.

We can skip over the countless e-mails where Roger asks for money, they give him some run around and obviously no payment is delivered. We get that people have mixed feelings about Roger, but it shouldn’t be hard to look at this from an objective point of view… especially with all of these e-mails out in the open. Roger conducts himself in an extremely professional manner, is well spoken/written, educated on the subject areas in which he discusses and is willing to expend the proper resources to have the issue resolved properly. OKC, on the other hand, continuously contradict themselves, have many employees and a CEO who apparently don’t know proper English, have a lawyer who uses Google Translate and seemingly can’t pony up a small amount of cash for a contract they signed/agreed upon, for an issue that is “a small thing in our [OKC’s] company”.

It also appears as if OKC offers Roger to engage in a payment scheme which may be less than kosher. 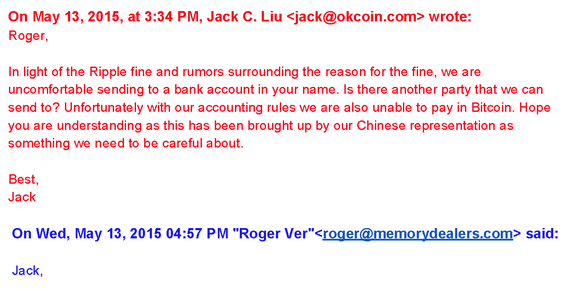 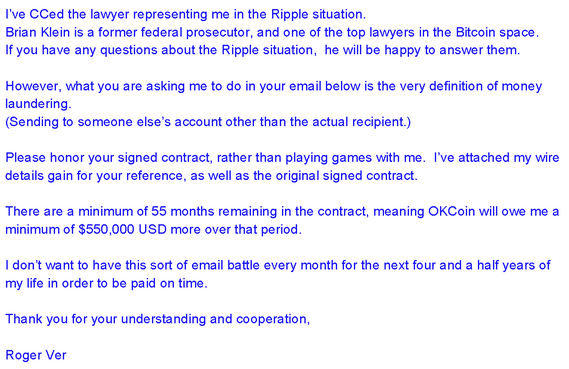 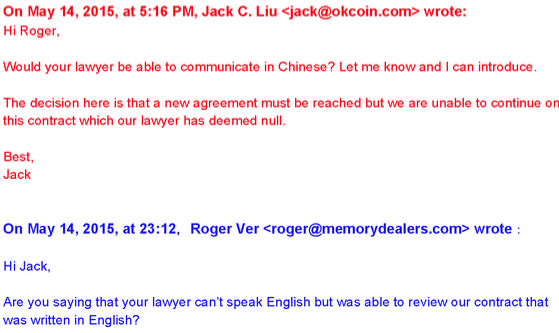 Again, we would like to highlight the point that OKC (even though they have investments from US based firms) does NOT have counsel which know English. WHAT THE FUCK. Putting aside the fact that OKC appears to have created a fraudulent document, how are they going to interface with the US authorities to ensure that they are in compliance with US regulations? If you don’t see the writing on the wall now, we are sorry for your future loss.

In case our readers think we are being hyperbolic, please see the next item.

There is an e-mail from OKCoin’s “lawyer”, which is in one of the Chinese dialects, and obviously wasn’t too impressive. Roger’s lawyer (in both Chinese (presumably Mandarin) and English) shortly responded, with the attached: 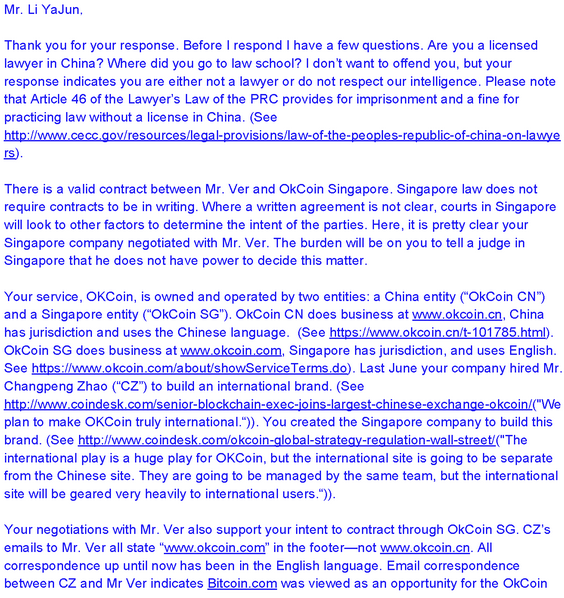 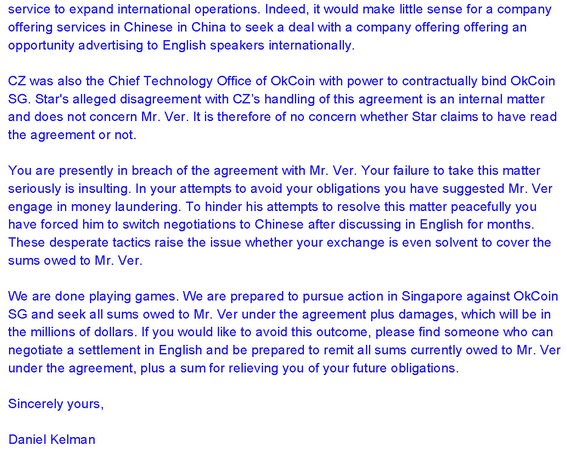 Edit: Here is the e-mail from OKC’s lawyer. 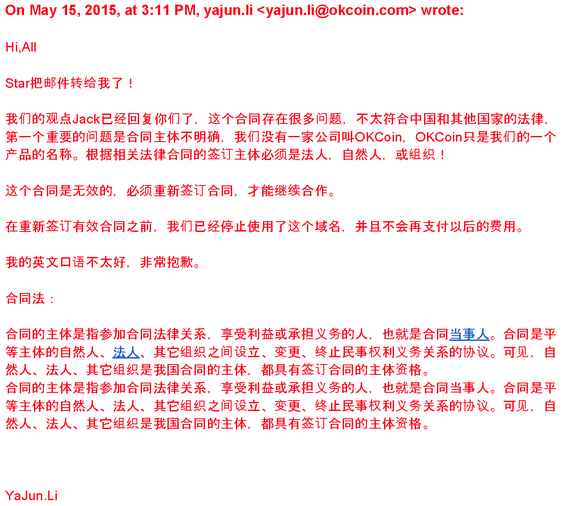 A reader knowledgeable in Chinese reached out to us after this report, and submitted the following:

There is some additional back and fourth which contains some more fireworks, but we can leave those for you to read – here’s the link again. Essentially, it is just more banter between all of the above parties, OKC acts extremely childish, Star makes some more shit up and Roger drops the hammer regarding cryptographic proof of fraud. It honestly is almost not worth reporting on some of the shit that OKC says because we don’t want to make the Bitcoin community look bad.

At this point, it appears as if the credibility of OKC as a company, and of their CEO personally has been completely liquidated (kind of like their customer’s trading positions). Be vigilant, do your research and decide which companies you feel have the best reputation when you engage in trading. If you haven’t been stop hunted, and actually make some profit, please consider the possible longer term repercussions towards the community for supporting a business like OKC. Some profit today is not worth it in the longer term, if OKC turns into Gox 2.0. We are all building this community together, and as a community we should self-regulate to limit the number of bad actors.