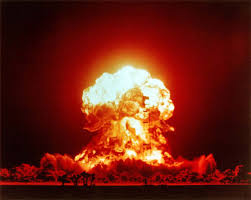 Some people are still pissed off at Roger for his Mt. Gox audit, but given the actions of government employees leading up to the questionable seizure of Mt. Gox bank accounts, we don’t think its really fair to place blame on anyone until all of the details are revealed. So if we can all agree to forget about that Gox thing for now, let’s just focus on the issue at hand. OKCoin fucking someone else over. This time though, it isn’t through stop hunts.

Remember back in February, when the OKCoin CTO left? The entire thing reeked of shadiness, but once again, let’s just give them the benefit of the doubt for now and say that it was a peaceful departure. Now let’s move many stop hunts and margin calls forward, it looks like OKC are liars, manipulators and probably under some sort of financial stress (aka running a fractional reserve exchange).

Roger hosted this DropBox link, where all of the source files can be found. For the non-believers after his last claim, this one contains cryptographic proof of scam.

Moving on to the most relevant and shocking parts of today’s revelations:

From, OKCoin Fraud and Forgery –

Sketchy as fuck. We will get into the finer details that Roger reveals, but already we can see evidence of OKC being liars and manipulators. Personally, I don’t really think anyone would want to put their hard earned bitcoin on an exchange that manipulates legally binding contracts, but that’s just me.

OKC has preferential rights to advertise for itself on bitcoin.com, but that probably won’t help increase revenue unless that advertising is purely to bring in new game (oops I mean customers) for them to hunt.

I’m Damian, I was Product Manager (UX) at OKCoin at the time the company took over custody of bitcoin.com. I can confirm the OKCoin statement is delibrately misleading.
The intention of the CEO, Star Xu, was to use bitcoin.com to advertise OKCoin. I know this because he rejected my first wireframe and asked me to add 2 links to OKCoin, one on the homepage just below the navbar and another just a few hundred pixels down. I still have the wireframes. Xu’s micromanagement of this project was among the reasons I left weeks later.
There was no plan for quality content at any point. No plan to add value to the bitcoin ecosystem. There was only a plan to advertise OKCoin.

Pastebin of the text.

The most relevant points from Roger’s timeline:

Link to the above transaction on the blockchain.

Just over a month in, we have OKC supposedly taking money from other companies for advertisements and never displaying them. As if the wicks that perfectly completed H&S weren’t enough, you traders have to be dumb as shit to keep any coin with these people.

Now OKC is about 3.5 months behind in payment, or $35,000 USD. Shouldn’t be much of an issue considering they GAVE AWAY $1.6 million worth of BTC just months earlier!

Then it starts to get really good, and Goxxey. 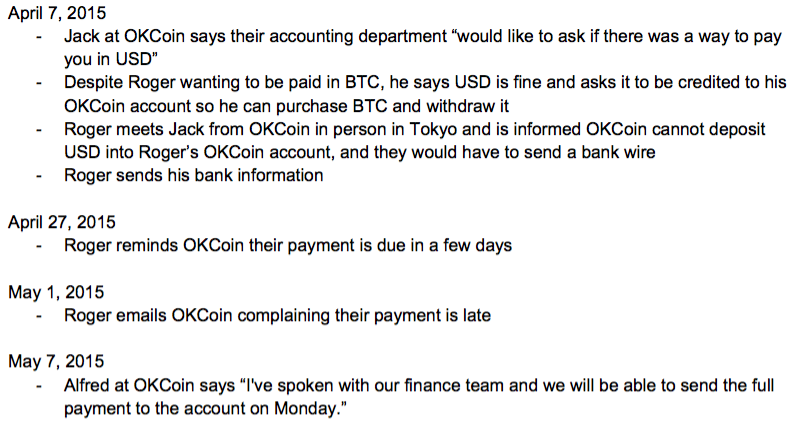 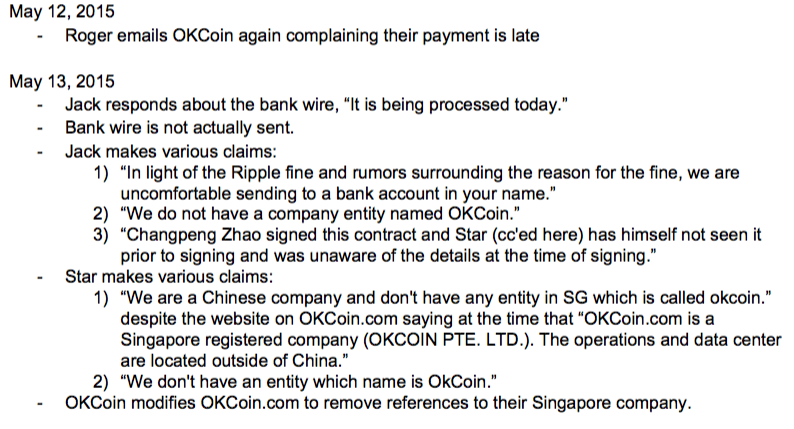 Sound familiar? The only thing we didn’t see here was OKC telling Roger he would get the money in two weeks. We don’t want to make any accusations, but it is starting to sound a little bit like OKC might be having some financial difficulties. They are trying to wiggle their way out of this using any slimy trick they can. This next part is just classic though, a fucking lawyer that conducts business using Google Translate? That’s right, the worlds biggest Bitcoin exchange (Bitcoin is this thing that’s supposed to revolutionize finance if you forgot) has a lawyer that uses Google Translate. Enough said. No, seriously though… there is a tip address at the bottom of this page, and if you trade at OKC you might as well just send your coin to our tip address before it disappears.

And to read that last document referenced from J. Maurice, click here. 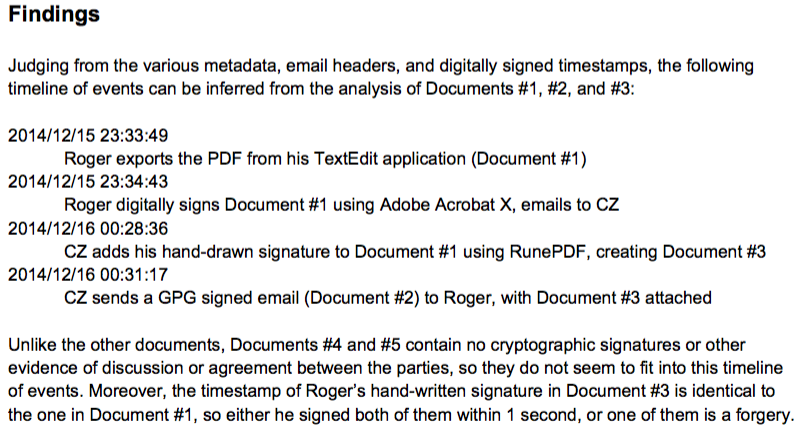 The tin foil hat wearers aren’t starting to sound so conspiracy theoryish about that resignation now, are they?

As if the on exchange shenanigans weren’t enough, here we have some pretty damning evidence that OKC is, in fact, as shady as we have all thought.

Thank you Roger for providing us with this insight into the operations of one of the worlds leading bitcoin exchanges. One that has the “highest volume”, and moves the price considerably. Maybe traders will start to re-consider their trading decisions, and use more transparent exchanges which actually act in the best interest of their customers… like BitFinex did today, when they promptly and professional took care of a small exchange security breach, and covered customer losses out of their own pocket.