Everyone is focused on Greece. We obviously didn’t have to tell you that, because you have internet connectivity if you are reading this. Bubble talk has already begun in the bitcoin community, and the pumps and dumps of the last 48 hours may be remembered as “the Reuters roller coaster” (although they should fact check before publishing). A novel idea, but we don’t believe that many Greeks are moving their trash cash into BTC at a rate that’s likely to impact the market. If you are Greek and reading this though, we suggest you head over to Coinbase and secure your wealth. While the msm is going to have a field day trying to tie bitcoin to Greece (as they did with Cyprus), let’s dig a bit deeper into the possible global implications of the upcoming (possible) “Lehman weekend”, and why not just the Greeks should be buying the coin hand over fist.

The capital controls narrative has been pushed all week, so it would be surprising if they weren’t implemented soon after all of the conditioning and herding the sheep have been going through. Of course, they are for our own protection, but for those who like to have control of their wealth, there is always plan ฿.

Let’s refer to the following paper:

A joint paper by the Federal Deposit Insurance Corporation and the Bank of England
We recommend reading the entire document, as it contains a large amount of good information. The paper outlines both the US and UK’s bail-in plans, and how the failure of a SIFI (systemically important financial institution) will be resolved. A quick Google search will result in similar results for most, if not all, G20 nations. See Canada and Australia.

Note: Investopedia definition of an unsecured creditor – An individual or institution that lends money without obtaining specified assets as collateral. This poses a higher risk to the creditor because it will have nothing to fall back on should the borrower default on the loan.

I.e.: Anyone who has fiat money that they “deposit” into a bank.
From the paper’s executive summary:

As the paper notes, “The unsecured debt holders can expect that their claims would be written down to reflect any losses that shareholders cannot cover”. This is mentioned again, a page later.

Note (in the following excerpt), that the goal is to “[avoid] the need for a bailout by taxpayers”.

And again, more about the strategies being developed, and how losses will be apportioned to shareholders and unsecured creditors. The goal is clearly stated, that such a resolution will not have any cost to taxpayers (via government bail outs). Why go after money after it has been paid in taxes, when you can just grab it right from accounts?

And then that miserable, hyphenated word shows up, “bail-in”. This is in reference to the UK regime’s strategy.

And, although wordy, the US strategy is equally bad, if not worse (if you are a creditor or equity holder of any kind). 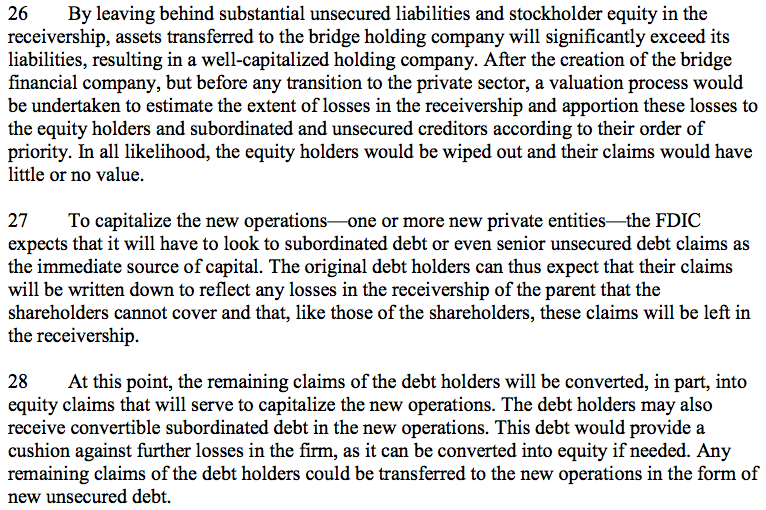 No need to summarize any of this, it’s all written in their own words.
There is plenty more of interest in the document, but for the sake of brevity let’s stop here.
Now how does this all relate to Greece? Whether or not capital controls are implemented or bail-ins are initiated this weekend, when it happens, it shouldn’t be news. The writing has been on the wall for years, and anyone with a little Google-fu can find the relevant information on the internet, sourced directly from the Central Banks and financial institutions themselves. While the MSM is pumping “this weekend” as some type of big event, they are kind of like the weather man in the sense that they can always be wrong and never get fired. But, just like the weather, that freak storm is going to come one day.
Unless you are already in Bitcoin, you don’t own your money. At least they are nice enough to tell you that though, right on the paper it says “note”.

In summary: While the people of Greece may not have a significant impact in BTC buy volume in the coming days, the psychological impacts felt globally after they are Cyprussed should start to push educated investor’s money into non bail-inable crypto-currencies. When we look back on these interesting times we live in, many will wish they bought BTC at $1,200 and rode it all the way down (then back up again), rather than having unspecified amounts directly taken from their bank accounts. As the famous saying goes, “if you don’t hold it, you don’t own it”. Holding bitcoin, and your own private keys securely, is an excellent hedge against upcoming financial turmoil. Just remember, if you decide to go boating, don’t bring a paper wallet. If you do, make sure it’s laminated. We wouldn’t want any accidents to happen.
Don’t forget about the famous Cyprus bitcointalk thread.
As The IMF puts it: 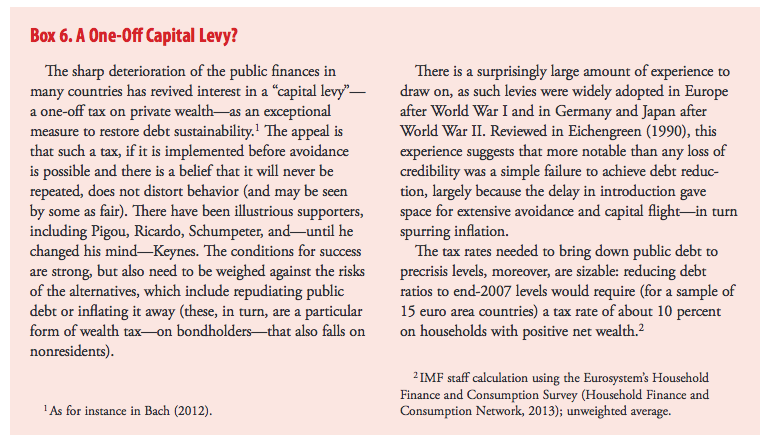